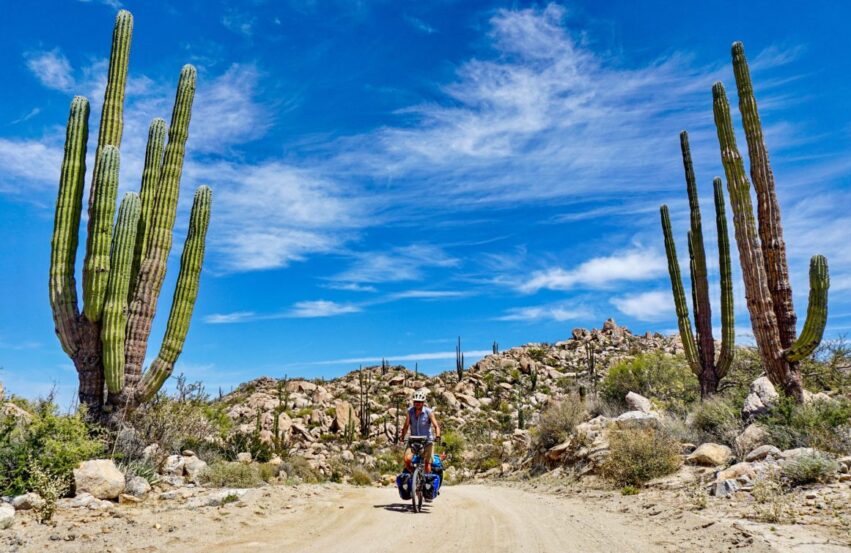 The Baja Divide was developed by Nicholas Carman and Lael Wilcox in the winter of 2015-2016 on two consecutive rides down the peninsula.

Lael and I last rode into Mexico in 2011 when we spent six months riding from Tacoma, WA to the southern tip of Baja, where we then caught a sailboat across the Sea of Cortez to Guaymas and rode a sharply folded route to the Copper Canyon. We enjoyed several off-pavement segments in Baja California– riding 1.75” tires and drop bars– while our route from the Pacific Coast to the Copper Canyon was entirely unpaved.

This was our first substantial off-pavement tour. In the following years we continued traveling and working seasonally, and we continued seeking off-pavement routes, eventually including more technical singletrack trails and long-distance routes in distant countries. We toured the Great Divide Route, Kokopelli’s Trail, the Arizona Trail, and the Colorado Trail.

We rode in dozens of countries and borrowed routing from walking paths, multi-day stage races, self-supported bike packing races, and long-distance touring routes, including the GR5 in Belgium, the Traversée du Massif Vosgien in France, the 1000 Miles Adventure in Czech Republic and Slovakia, the Red Trail in the Beskid Mountains of Poland, the Top Trail 3 in Montenegro, the Bike Odyssey race route in Greece, the Dragon’s Spine across South Africa, and the Holyland Challenge in Israel.

In the fall of 2015, after a busy summer of working and racing– including a three-month period in which Lael raced the Tour Divide twice, riding to the start from her home in Alaska both times– we were both very tired. We toured the Arizona Trail that fall, which did little to achieve the restful feeling we sought. We considered winter plans on the bike, weighing a cheap flight to Cairo to ride in Egypt and Sudan against another winter south of the border.

In early December, 2015 we crossed the border at Tecate into Baja California, MX. For the next few weeks along quiet dirt roads we enjoyed long nights, short riding days, and mellow winter sun. About a third of the way down the peninsula on a ride from Coco’s Corner to Bahia de los Angeles– sparked by the quality of the riding, the food, the people, the camping, the sea– we realized we needed to share a route in Baja California. I knew, after much research, that there weren’t any off-the-shelf routes in Baja. There was a great lack of information on bicycle routing in general. 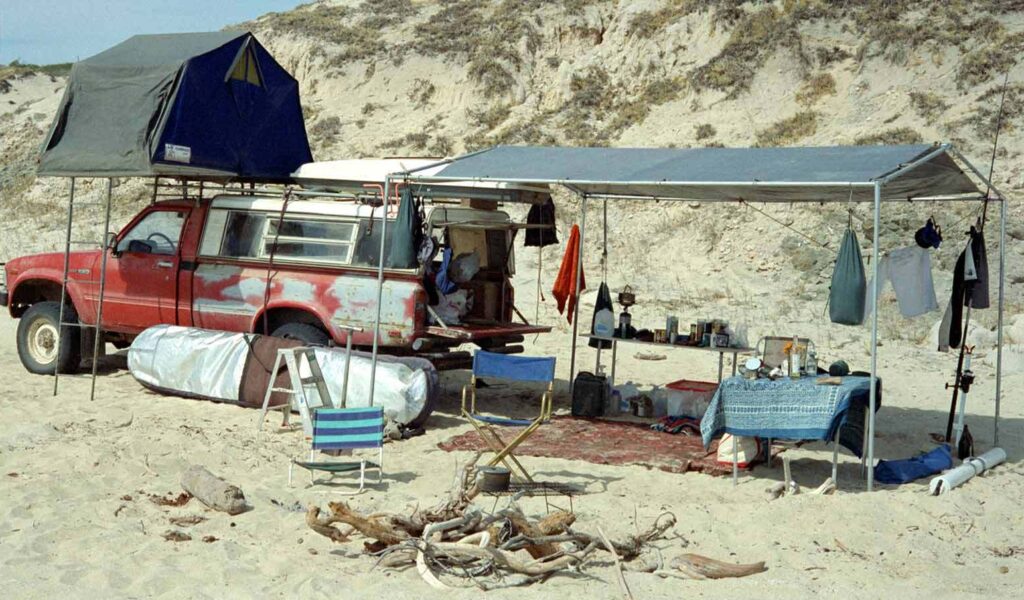 For the hundreds of cyclists who ride the length of the peninsula on MEX1 every year, few venture off the pavement and despite the great popularity of backcountry touring in Baja with motorbikes and trucks, the information that cyclists need– including intel about water resupply and unrideable deep sand– were missing. At first, we simply planned to informally document and share our route, but the scope of the project quickly grew and we committed to developing “a route” for the public.

Our project was to be more than just a GPX track recorded on a ride down the peninsula, it is a well-researched route resulting from several months of planning and riding. After riding down the peninsula for the first time in December and January, we hopped a bus back to Tijuana and did it all again in February and March, seeking new routing to fill holes, and verifying known tracks. We named it the Baja Divide.

Some segments of the Baja Divide are classic backcountry routes which have been ridden many times before, while others are unique connections discovered while trying to avoid highways or circumvent roads erased by storms. For instance, when a backcountry connection between Vincente Guerrero and Catavina seemed too remote and too long for self-supported bicycle travel, we looked across an expansive agricultural valley and discovered two local MTB singletrack networks, a bustling highway town with a great bike shop, and a unique route through the low brush of the coastal salt marsh, finishing with three miles along the Pacific Ocean in the intertidal zone on a hard sandy beach.

A similar thing happened in the Sierra de la Giganta, when we discovered a series of mountain routes south of San Ignacio had disappeared in recent hurricanes. Again, we looked toward the ocean and found a network of hardpacked roads on dry lake beds with frequent tailwinds.

In developing the Baja Divide, our main priorities were to help riders discover backcountry Baja, avoid paved MEX1, and make contact with unique places on the peninsula via routes that are fun to ride. The resultant route is about 95% unpaved, with about 5% paved routing mostly on smaller secondary roads with very little traffic. Unpaved sections of the route vary greatly including: high quality graded dirt roads which are well-traveled by locals and backcountry tourists, storm-damaged roads in canyons with soft sand and loose cobbles, steep eroded tracks, and sandy doubletrack amidst salt marshes along the Pacific Ocean.

While researching the Baja Divide we used the out-of -print Baja Almanac along the with the most excellent E32 Cartografia digital basemaps. One of the two resources usually suggested possible routing, although strong hurricanes in the past few years have seriously damaged roads in the central part of the peninsula, from Bahía de Los Ángeles all the way down through the Sierra de la Giganta to La Paz.

We met other challenges along the way. Backcountry ranching and rural subsistence lifestyles are also diminishing, as young people move to communities near the highway, or to larger cities in Mexico. When roads no longer support everyday commerce, the government is less obligated to repair those routes after storms. Paving projects are also changing the pensinsula.

The dirt road south of San Felipe in northwestern Baja California, a once popular off-pavement route which passes Coco’s Corner, is now paved all the way through from Mexicali to Laguna Chapala. The Baja 1000, which in many ways is responsible for popularizing backcountry travel in Baja, is also to blame for severe devastation to the land. When the Baja 1000 comes through, with hundreds of thousands of horsepower, roads are widened and multiplied, sediments are loosened and deep sandy tracks develop. As soon as the first major rain arrives thereafter, severe erosion changes the land. 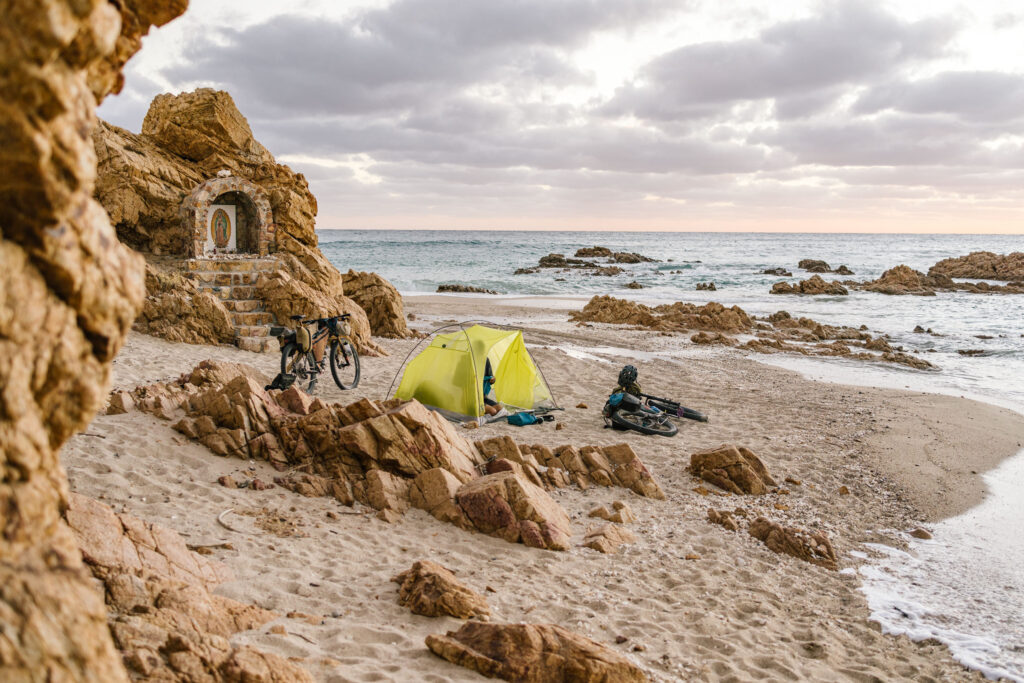 Lastly, there are many sandy sections along the route that present significant challenges to the bicyclist. Where a 4-wheeled vehicle will have no trouble staying afloat, and where a motorcycle might escape sinking with high RPMs, the cyclists either floats or walks. We’ve made our best effort at avoiding the worst sandy sections, although sand is still common along the route.  For this reason, 3.0″ tires are recommended.

The future of backcountry travel in Baja is bright. Sustainable ecotourism models are expanding across the land, including several key businesses along the route such as Rancho El Coyote and Rancho Escondido (El Progresso). Mountain biking is also growing quickly in Baja, with new trail centers and increased participation annually. The singletrack system outside of Vincente Guerrero is used for regional competitions, attracting riders from as far as Ensenada. Several groups are developing trails in the cape as well, such as in El Sargento and Cabo Pulmo, which exist with strong support from expatriate residents from the USA and Canada. Motorized backcountry travel and racing remains popular in Baja and provides support for some of the resources which benefit riders on the Baja Divide.

A number of friends and acquaintances assisted while researching the route between December and March 2016.  Special thanks to Alex Dunn, who joined us for two months of riding in Baja and whose Spanish proficiency and humor were essential to the process.  Montana Miller and Colleen O’Neil were riding down the peninsula contemporaneously and scouted several routes for the project.  Rob Clark in Anchorage, AK helped tremendously with shaping the GPX track, while Scott Morris assisted with polishing the final product.  Thanks also to Warren Bruce in La Ventana, Salvador at FASS Bike in Vincente Guerrero, Flo and Travis in La Paz, Roman De Salvo in San Diego, Susie Murphy in San Diego, and friends Christina Grande, Erin Nugent, and Betsy Welch.

Riders are asked to provide specific feedback about the Baja Divide, especially during the inaugural season of 2016-17. Please note changes to the terrain along the route such as flood damage and closed roads, private property or other prohibitive signage, or improved routing where pavement or tedious routes are currently required. If you don’t like a part of the route, find a better way and share it. Please record all tracks and waypoints via GPS and email to [email protected] 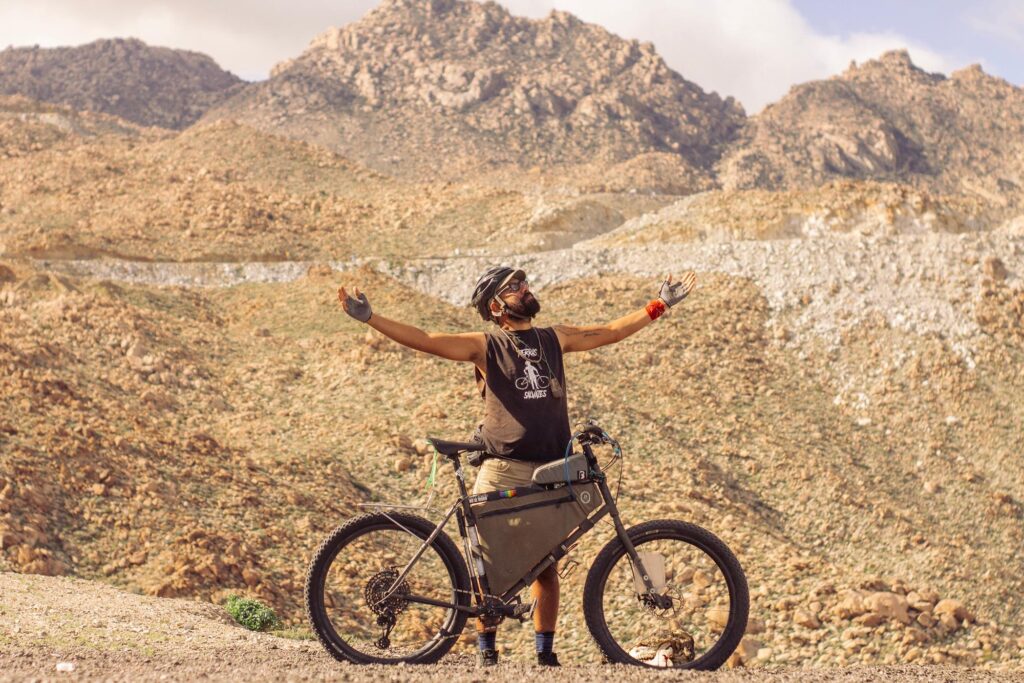 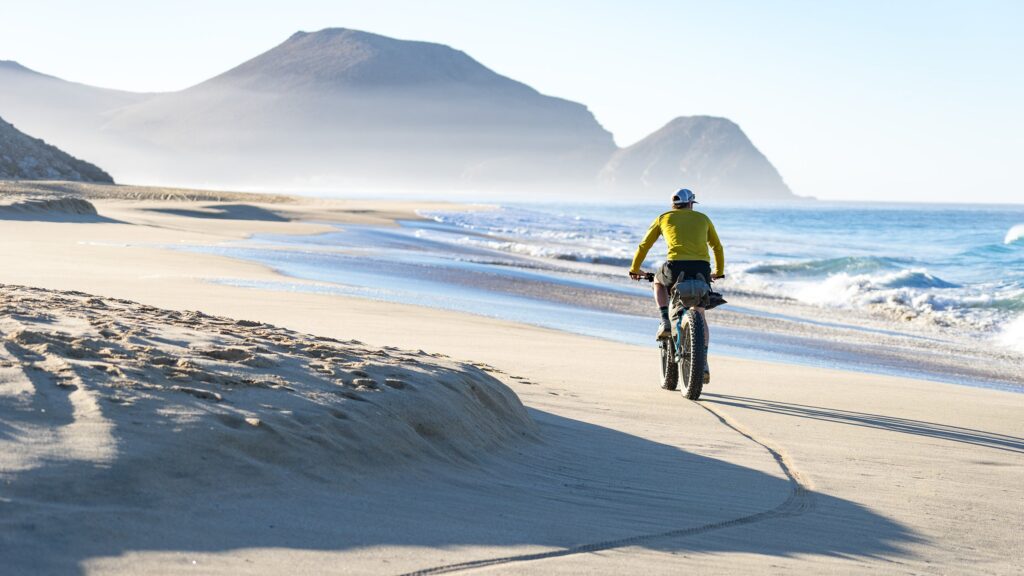