Lael Wilcox and Nicholas Carman conceived and researched the Baja Divide during three months of riding in Baja California in the winter of 2015-2016.  Lael has been traveling by bike for the last nine years, and has recently taken to ultra-distance bike racing with success in the Tour Divide and Trans Am Bike Race.  Lael rode the new Advocate Cycles Hayduke last season and recorded her thoughts on the bike in a review for Bikepacking.com.

Previous bike/touring experience: Touring for 9 years, racing for two. My first trip was from Maine to Key West in 2008 and I’ve spent at least half of every year since then traveling on my bike.  Since 2008, we’ve focused more and more time off-pavement, and we now almost exclusively tour on mountain bikes.

Tubeless notes: Tubeless tape on rims, both tires are tubeless ready, 6 oz of sealant per tire.  No issues, except when a large thorn that had been stuck in my tire punctured my rim strip.  We unseated one bead and fixed the rim tape with a piece of duct tape, then reinflated using the compressor at a dive shop in Cabo Pulmo. I taped a spare 27.5×3″ tube to my frame and never had to use it.

Luggage: Revelate Designs prototype Ranger framebag, small Sweetroll and small Pocket, custom large seatpack and custom oversize Jerry Can.  All of this stuff has been used on other rides, including the Tour Divide, Arizona Trail, and international tours in Europe, South Africa, and the Middle East.

Water: King Cage Top Cap bottle mount with Specialized Rib Cage and 26 oz. Purist bottle; 64 oz Klean Kanteen in a Salsa Anything Cage, attached via steel hose clamps; Salsa stainless cages and 26 oz. Specialized Purist bottles, attached to fork via hose clamps; two collapsible 2L Platypus bladders.  Occasionally, we would purchase or scavenge additional drink bottles to carry more water during long dry sections of route investigation. There is hardly any surface water in Baja California, so water filters aren’t necessary. We bought most of the water we drank from stores and purificadas, and drank some water from streams in the mountains.

Packing strategies: Clothing and gear were very minimal to leave more room for fresh food and water. Clothes and tent go in the seatpack. Sleeping pad and sleeping bag go in the Sweetroll up front. Tools and toothbrush go in the non-drive side zippered pocket of my framebag. Food is in the main compartment of the frame bag. Don’t carry food that will melt or sweat in the sun, like chocolate and queso fresco!  Nick carried tent poles and stakes, as well as a small 0.6L cook pot that we rarely used, except to make coffee.  It isn’t easy to find alcohol for our stove in Baja, so we mostly ate fresh foods.

Equipment recommendations: Winters in Baja are typically dry and warm. Typical summer gear works great here. It’s a desert and there aren’t really any bugs in the winter, so it is ideal for minimal shelters like our pyramid tent.  Most of the time we slept out under the stars, although our first week in early December was a bit damp with some freezing nights, and most nights along the Pacific brought heavy dew and fog.  Winds can be strong, so be sure to bring some good tent stakes.  Chances are, if you really need your shelter, it will probably be windy and the ground will be sandy.

Pack light! If you’re debating whether or not to bring something, don’t bring it.

GPS is necessary for navigation of the route, but carrying a paper map helps when explaining to locals what you’re doing on a bike in remote areas.  The National Geographic map set of Baja is a good overall reference, and many of the tracks used on the route are on those maps.

I didn’t use Ergon grips during the first month of traveling in Baja last year, and it was a big mistake.  Ergon grips are amazing; I like both the GP1 and the GS1.  The Answer 20/20 bars I have used for the last few years are also really comfortable as they provide a 20 degree bend.

I feel safer in Baja than I do in the US. We have never felt unsafe during the three months we travelled through the peninsula last year, or the three months we spent in Mexico in 2011.  The people of Baja are warm, accepting and calm. Traveling down there feels really free. I felt like I could’ve stayed forever— until March when it started getting really hot.

The camping is exceptional!

I’ve never seen so many different cacti in my life.

The tacos are really good, but being in the backcountry is really what this route is all about. 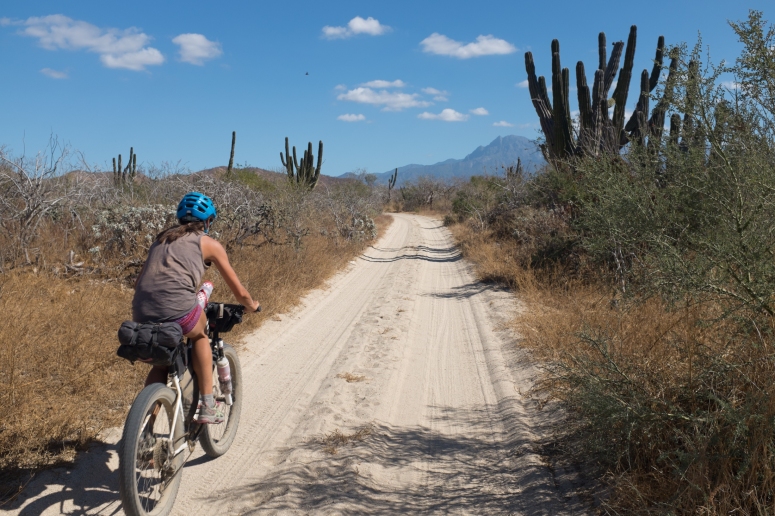 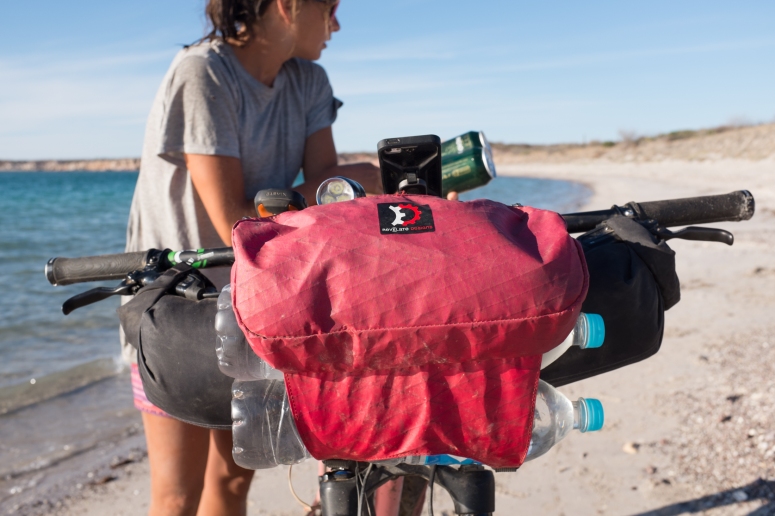 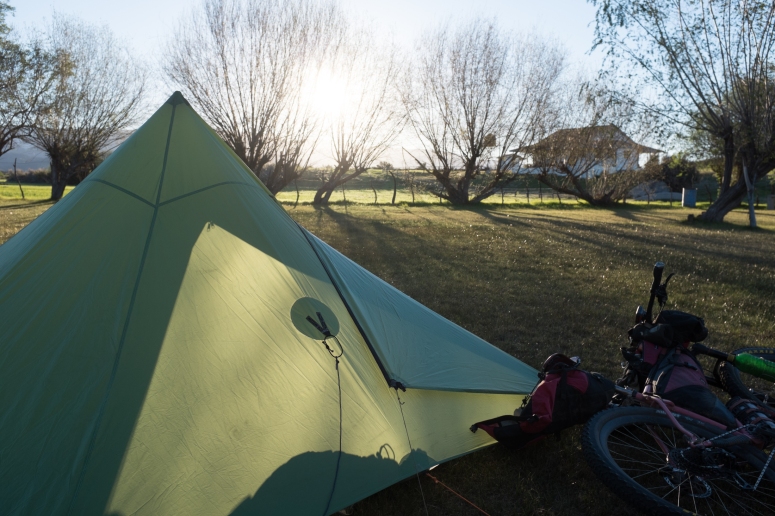 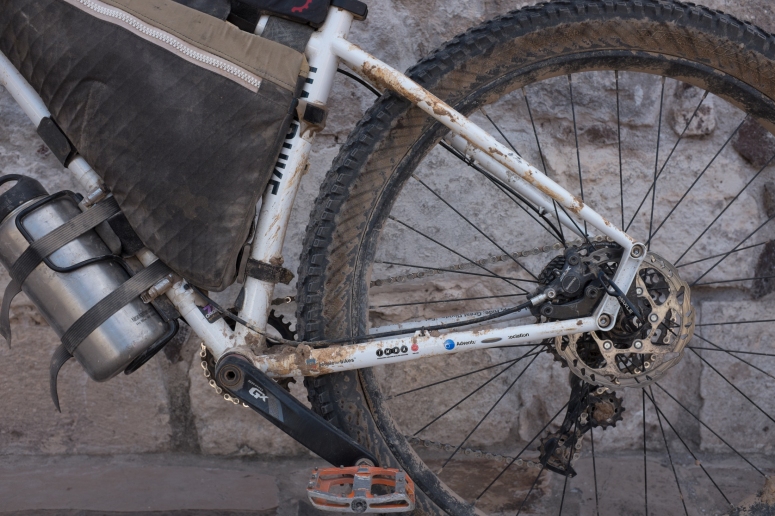 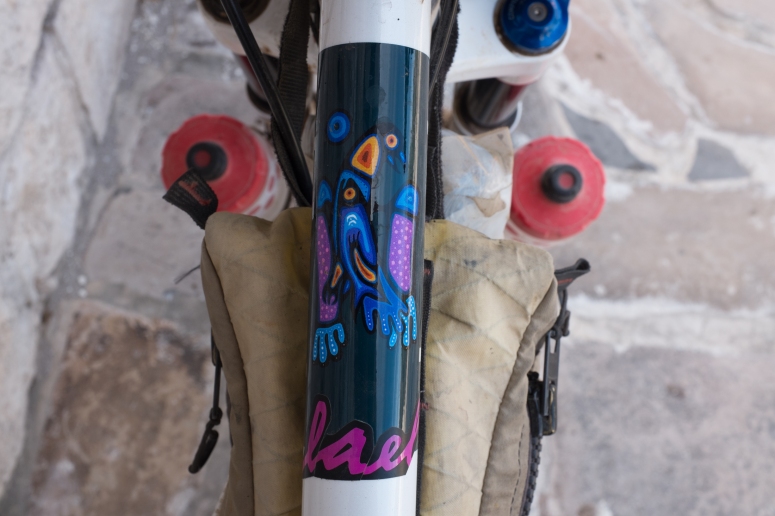